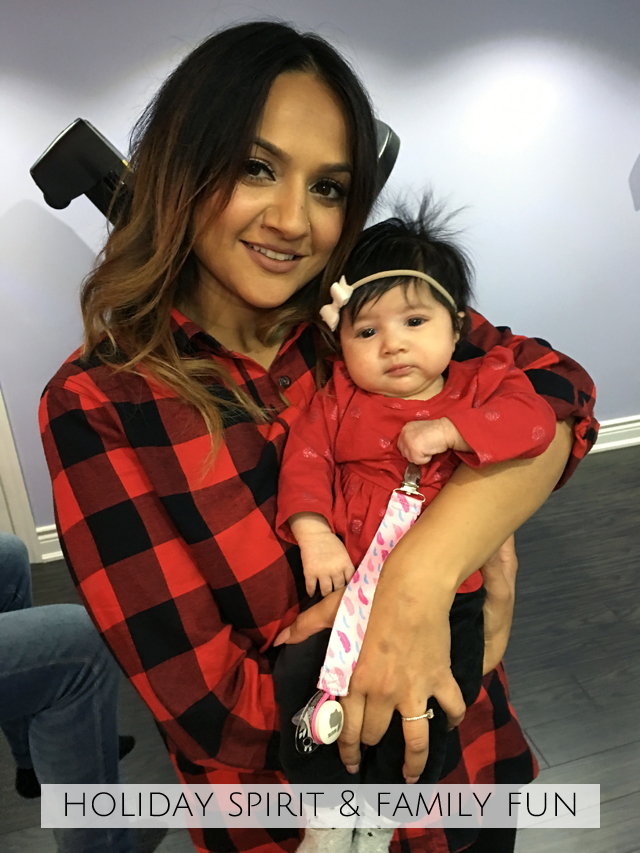 Back with your 2nd weekly recap for you guys! I was surprised by how many of you that read the first one, it was really touching. As long as you guys want to read them, I will keep posting them:)

This week was a pretty busy one, more so towards the weekend. The week itself was pretty much the same as usual, makeup and blogging and youtubing. I posted 2 videos on youtube this week, a Holiday makeup tutorial and a Holiday beauty hacks vid. I’m trying to stick to a twice weekly video schedule, hopefully I can manage to keep it up during the holidays! This week I’ll be posting a Holiday hair hacks video and a Deep Beauty one 😉 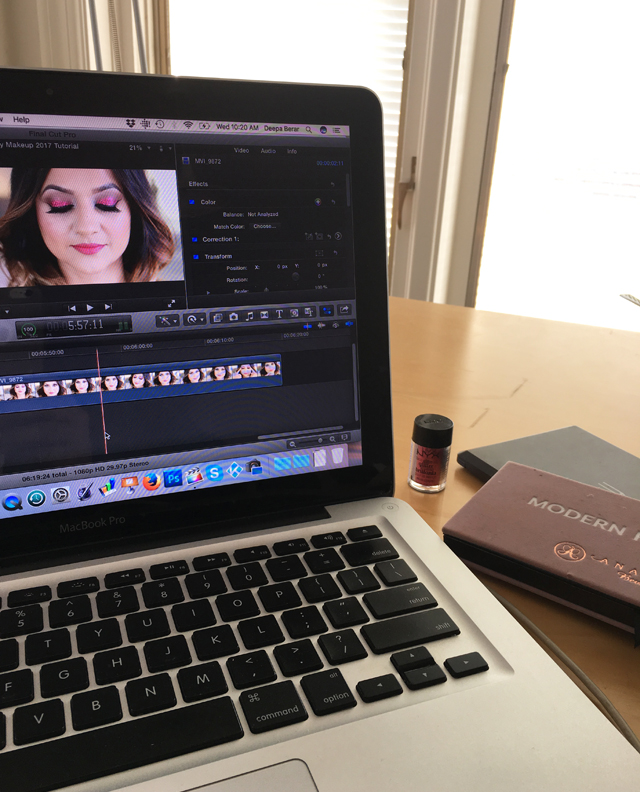 Friday was the holiday tree lighting ceremony in downtown Burlington. My mom and I have wanted to go to this for several years now but she’s either out of town, or I am and the one year we were both home for it there was a huge snow storm that day. So we were determined to make it to this one and the weather was perfect! Not too cold and no snow. The tree was gigantic, it’s right in front of the city hall if you want to check it out. 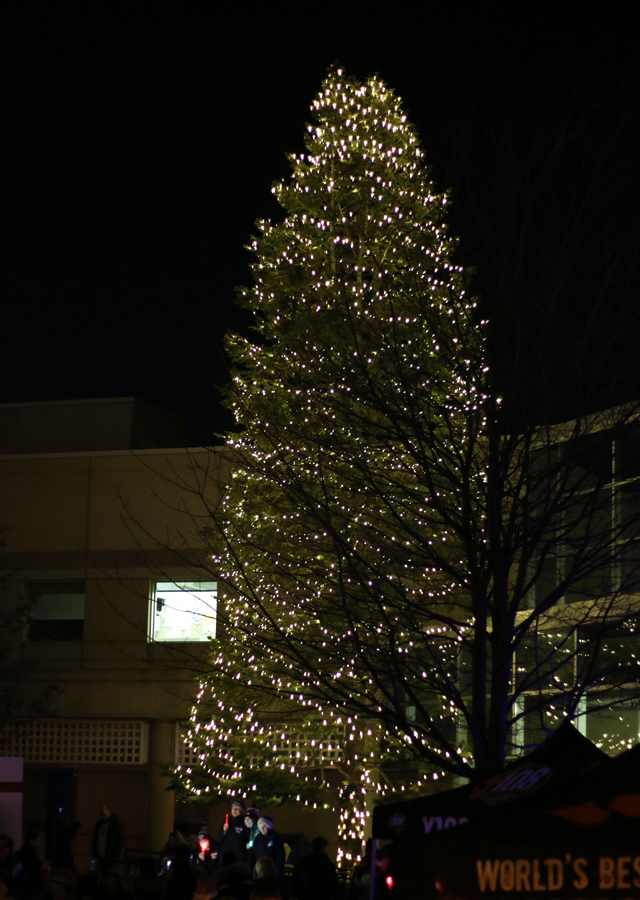 There were so many people that attended, after the tree lighting they were all going for the walk around the downtown core which ended at Spencer Smith Park. I love downtown Burlington, it’s so pretty and the park is amazing, and it was even better with all of the decorations and lights everywhere. 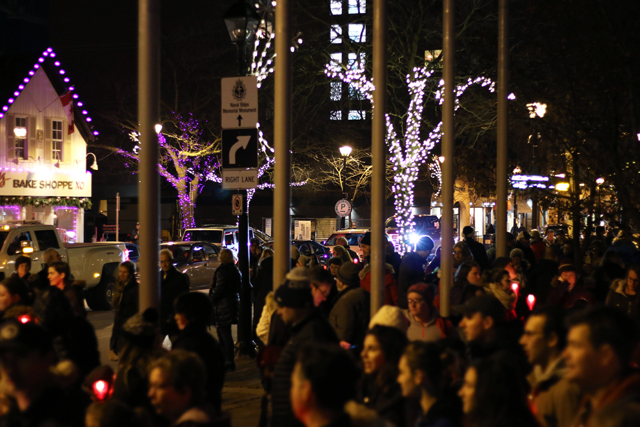 My mom with her candle. It was cute to see everyone with their families, it was really special. 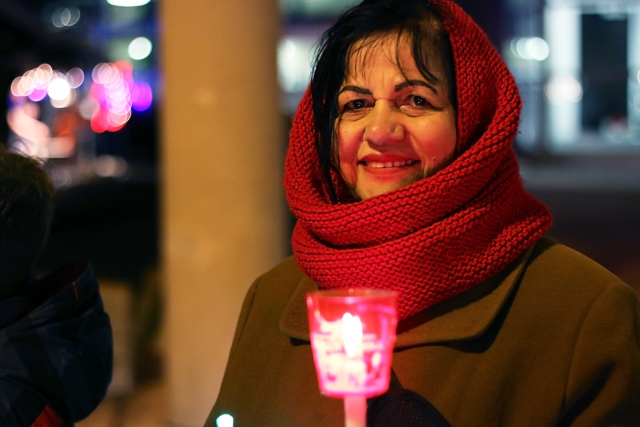 So I was busy taking pics for the blog when all of a sudden I hear “Deepa Massi!”. My cousin Deep and her daughters just happened to be there! It was so nice seeing a friendly face and the kids are so cute they always make you smile. We got to catch up for a bit before they headed down to the lakefront. 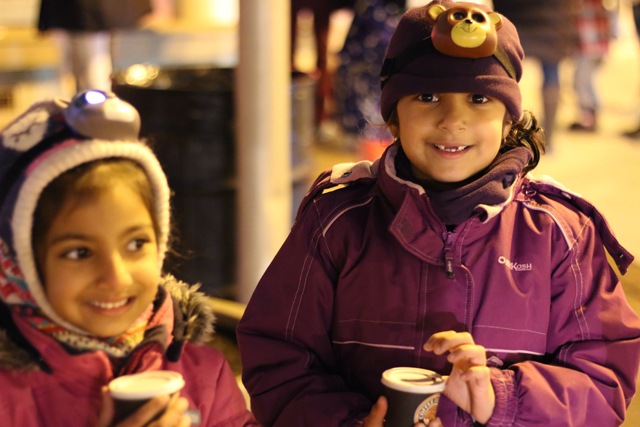 Ok so I’m totally not vegan (although I think about it sometimes) but my absolute fav vegan spot is Kelly’s Bake Shoppe. Well it’s more of a bakery and they make the most delicious vegan, gluten free desserts. Plus I am in LOVE with their branding. On point. Isn’t their shop the cutest?! 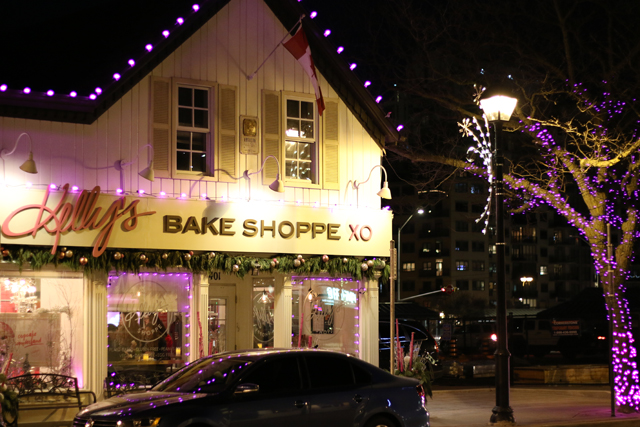 Me in my winter gear. Trying to enjoy this winter as much as possible, there’s no such thing as winter in San Diego. Plus I’d rather have a positive outlook about the weather as, well, there’s nothing you can do about it so might as well find a way to enjoy it. Hence the cute hat, scarf, coat & boots lol 🙂 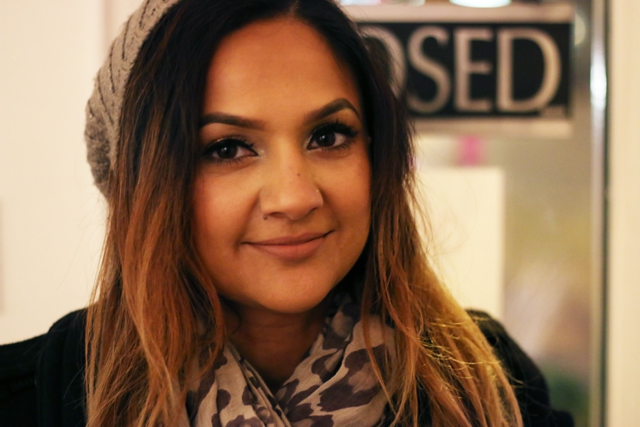 We ordered the brownie and split it. So yummy. If you ever have the chance to check it out, try the red velvet cupcake. It’s delicious.

Next we headed over to my cousin Reena’s house. Her and her sister Preeti were holding an open house. It was a great setup! Reena was selling her jewelry and Preeti was selling her bath bombs and soaps she makes. I picked up a pair of earrings and a necklace Reena made. She’s so talented!! 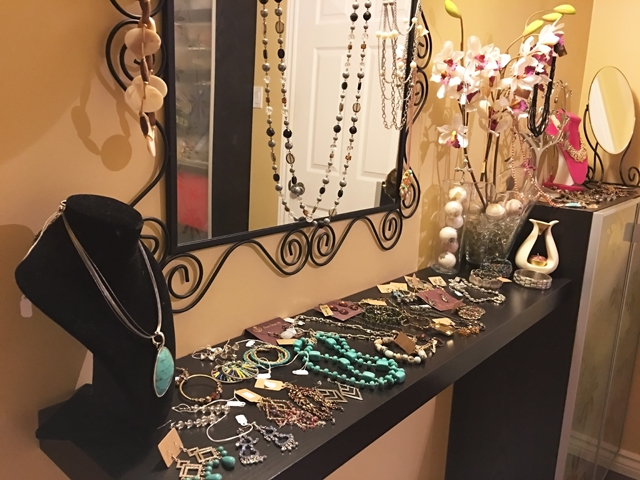 They have a parrot named Oscar. Oscar is the cutest. I was trying to get him to say “How you doin” like Joey from Friends. I swear he was staring at me so intently, trying to pick up on how to say it. They are really smart animals!

Oh and in case anyone is wondering the lipstick I’m wearing is the Birthday Suit liquid lip from Tarte and MAC Whirl lip liner. 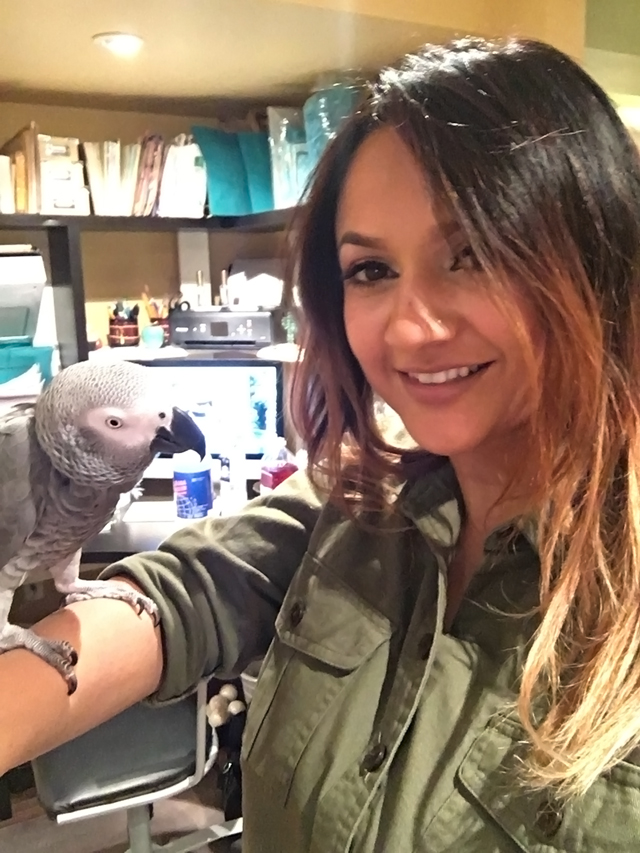 Shoppers Drug Mart sent over the cutest advent calendar! I can’t remember the last time I had one. This one has mini nail polishes from Quo by Orly. Check out my Insta stories to see the daily nail polish 🙂 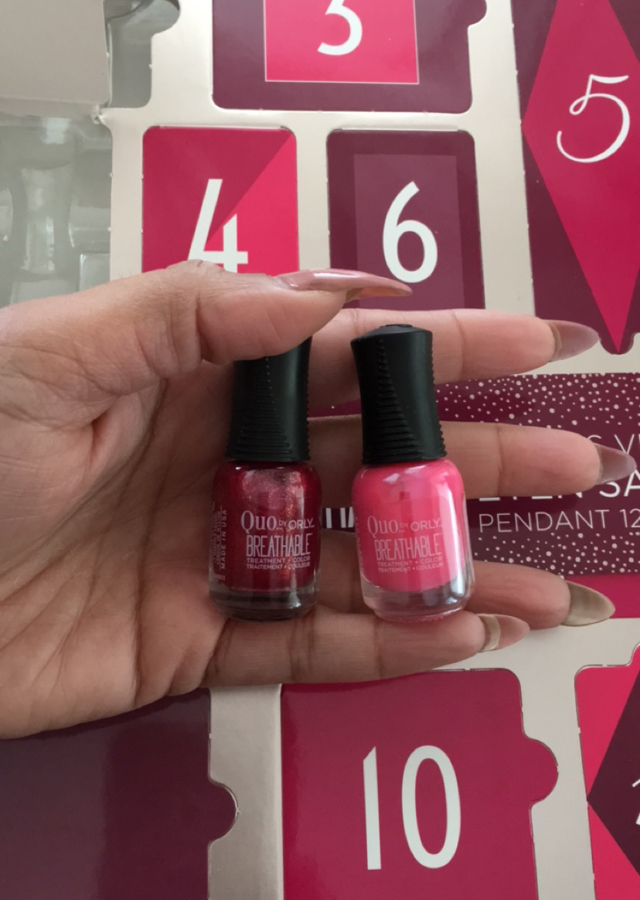 Saturday my cousin Daman and his wife Charan had a few of us cousins over for a fun holiday get together. I haven’t been home for the holidays for the past few years so it was really nice to be able to attend one get together before I head to San Diego next week. Loved the holiday food spread. There was veggies, fruit, a charcuterie board, empanadas and endless drinks of course 😉 If anyone knows the name of those round orange things, let me know. We couldn’t figure it out for the life of us. It had tons of tiny little seeds in it and had a sweet/sour taste to it.

Ok so this next pic has to be my absolute fav of the week- a 5 people family group hug!! It started off with me and Nayan (my cousin Kelly’s son, you can see her daughter Leeya at the top of this post) and then slowly people joined in until we were 5. So cute 🙂 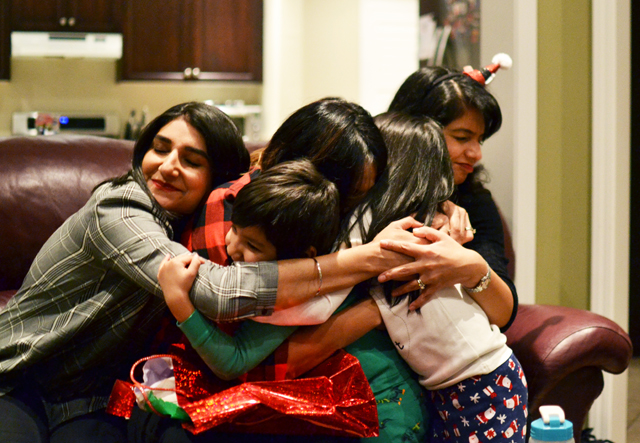 The fam 🙂 always so much fun with these guys! 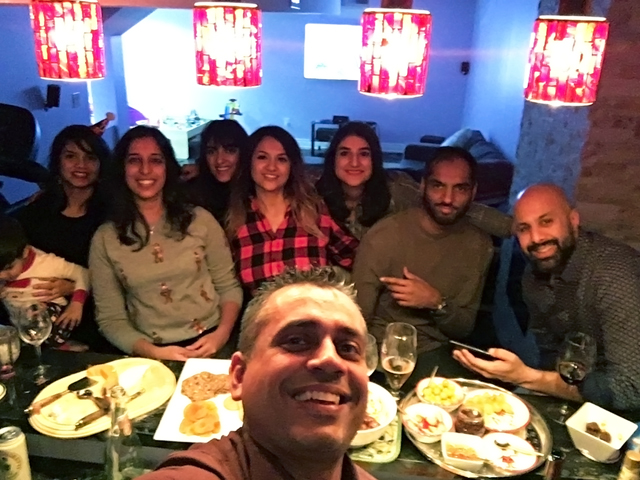 How was your guys weeks? Did you have any holiday parties?